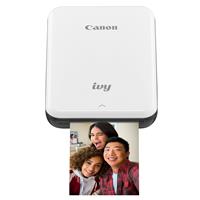 What Are The Best Photo Printer Brands?

We looked at the reviews for every photo printer and used this to calculate the average overall rating of each brand. The top rated photo printer brand is Canon with an average rating of 85%. Compare all award winning photo printers.

How Quickly Do Photo Printers Drop in Price?

Should You Buy a Canon Photo Printer?

Should You Buy an Epson Photo Printer?

What Are the Best Photo Printer Brands?

QWhat is colour depth mean on a photo printer?
AColour Depth is a measurement of how many colours the printer can produce - a higher colour depth means a greater visual fidelity between the print and the original photo.
QWhat is Pictbridge?
APictbridge - or Direct Printing - is a system to allow users to print photos directly from their camera or phone, without having to connect to a computer first. This can either be done using a cable or wifi.
QWhat is Z-INK?
AZ-INK - or 'Zero Ink' - is a photo printing method that doesn't require a normal print cartridge to work. Instead it uses special paper that reacts to heat, giving different colours at different temperatures. This 'inkless' printing makes ZINK printers perfect for instant cameras and portable printers.

Photo printers are a subsection of standard printers, specifically designed for printing photos taken from digital cameras. While most devices can still be used to print standard black & white documents, their real strength lies in their ability to print high-quality photos, posters and prints, with a colour depth and resolution far higher than most inkjet or laser printer. In this guide we will outline the main considerations when choosing a photo printer, allowing you to decide on the best model for your needs.

First up, cost. Photo printers are specialist peripherals, and the inks and components used are far higher quality than most other printers. Because of this, photo printers are generally far more expensive than a comparable inkjet or laser printer.

Therefore in order to get the best value for money from a photo printer, you should be using it frequently specifically to print photos. Otherwise, you may gain more value from buying a high-quality inkjet or colour laser jet printer (which can still print photos, just not at such a high resolution), and using the services of a copy shop or print kiosk if you want to print especially high-quality photos.

Photo printers are largely defined by the resolution and colour depth they are able to print at. Resolution is measured in dots per inch (dpi) and governs how detailed the resulting print is, especially when photos are blown up to larger sizes than they were originally taken at. If the printer has a low supported resolution, then the prints may look blurry or out of focus, whereas extremely high resolution photos (for instance, those with a DPI of 3,000 and above) will continue to look sharp and full of detail even when blown up to poster-sized prints.

Colour depth is a measure of the colours the printer can produce - a higher colour depth means a greater visual fidelity between the print and the original photo.

With both of these attributes, higher values lead to a better overall print output. However they also usually come with increased price, so you should balance the quality you design from your prints against your budget. Most of our photo printers have a detailed breakdown of these attributes, allowing you to choose more intelligently.

The other defining factor of a photo printer is the supported print size. Some photo printers are the size of standard inkjet or laser printers, and can print up to A4 size. Others are much smaller, and can only print dedicated photo sizes (e.g - 4 x 6, 5 x 7 or 10 x 4 inches). These ‘small format’ photo printers are generally cheaper and more portable, but are incapable of printing large photos.

On the other end of the scale, some photo printers are much larger, and come with the ability to print at A3 scale or even larger. These printers usually come equipped with a very high resolution & graphical fidelity… and a price tag to match. These models will most likely only be of interest to professional photographers or serious hobbyists.

While most photo printers work via a USB connection with your computer, several more advanced models have increased connectivity options. These can include:

Direct printing capability: Printers with this option can connect directly to digital cameras, allowing you to print photos straight from camera to printer, bypassing the need for a computer. This is extremely useful with small-format portable photo printers, since it means you can take photos then immediately print them out without having to upload the photos first.
Integrated card reader: Rather than a direct connection, some models of photo printer allow you to insert an SD card and print directly from there. This can save a substantial amount of time downloading and transferring print data, since the printer will have immediate access to all the photos on the SD card
Network capabilities: Though not common, some newer models of printer have wireless or bluetooth connectivity. This allows you to print photos without the need for a physical connection, making printing easier and more efficient.

We have evaluated 872 expert reviews and 1,815 user reviews for photo printers and used this information to evaluate the average rating for each brand of photo printer.

When Are Most New Photo Printers Released?

How Fast Do Photo Printer Prices Drop After Release?

On average photo printers drop in price by 12% in the first 6 months after release.

A typical new photo printer costs on average $361. By waiting 6 months before buying you could save on average $43.

'Maximum Resolution' indicates the largest image resolution (detail level) that the photo printer is capable of printing at.

A larger print resolution means that the photo printer will be able to produce more detailed, sharper photos - leading to a far higher-quality end result.

'Maximum Print Size' is the largest possible size paper that the printer is capable of printing onto. Larger sizes mean that the photo printer is more versatile, and can handle different print jobs.