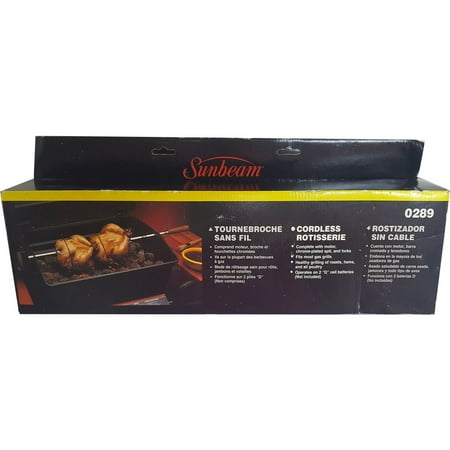 Should You Buy a Tepro Barbecue?

What Are the Best Barbecue Brands?

QWhat is the difference between a BBQ and a Grill?
AWhile the two are used interchangeably, generally speaking BBQs are large cooking appliances meant for use outside, while grills tend to be smaller and can be used inside.
QWhat is a smoker function?
AA smoker is a function of a bbq that means it can be used to smoke meat and fish. There are 2 different types of smoker - hot smoking places the meat above the main heat source, and uses the hot smoke to cook the meat. Cold smoking, on the other hand, keeps the food in a separate container and channels the smoke through a funnel from the heat source, meaning the smoke is cooler when it 'cooks' the food.
QWhat is the benefit of a lid on a BBQ?
AOutside of keeping it cleaner when not in use, lids are useful for trapping heat when cooking meat, meaning the temperature under the lid rises sharply, allowing for a faster cooking and a seared outside to the meat.

Barbecues and grills are cooking devices meant for both outside and inside cooking. They usually comprise of a metal grill suspended over a fuel source (charcoal, gas or electric). The food (usually meats) are placed onto the grill, where the high temperatures from the fuel cook it quickly and efficiently. Barbeques are the epitome of summer cooking - great for parties and quickly cooking large amounts of meat and vegetables.

The two names can be used interchangably, but here are the main differences between barbeques and grills. It's important to be clear on which type you want when buying, because outdoor barbecues generally can't be used indoors - they generate a lot of smoke, that will make a kitchen very unpleasant very quickly!

Barbeques don't require electricity - prefering to use a fuel source such as charcoal or gas. They can be significantly larger than grills, meant for cooking for families and groups, which also means they can be more expensive. Their fuel sources generate a lot of smoke, meaning the can also be used for hot smoking meat and fish.

Grills are usually smaller than barbeques and can be used inside. They tend towards either electricity or gas as a fuel source, meaning they produce less smoke, but are more costly to run. They are meant more for small families, apartments, or places where setting up a big barbeque and causing lots of smoke would be more of a challenge. This means they can be significantly cheaper: however, since they don't use charcoal or wood as a fuel, you don't get quite the same chargrilled taste as a proper barbeque.

Grills and barbecues come in all different shapes and sizes - from very small one-person grills that can only cook a couple of sausages at a time, to enormous barbeques that can easily cook entire racks of ribs or whole birds at once. The barbeques and grills on our site have a cooking surface measured in centimeters - the larger it is, the more food can be cooked at once. Smaller grills and barbeques may be marked as portable, meaning they are specially designed for picnics or outdoor parties.

As mentioned above, barbeques and grills can use several different types of fuel sources. Outdoor barbeques tend towards charcoal, wood or gas, while indoor grills tend to use either gas or electricity. It's important that generally speaking one can't be substituted for the other - so make sure you have access to a source of fuel for your chosen barbeque before you buy it.

Some of our grills and barbeques are marked as having a lid. These are extremely useful for both increasing the heat of the cooking, and limiting the smoke generated by the barbeque. They are also essential for smoking, since it traps the smoke that gives hot-smoked meat and fish their unique taste.

Grills and barbeques are extremely customisable, and come with a wide variety of extras that can help you cook more effectively. These can include a non-stick coating to the grill rack, detachable legs for larger barbeques or a double-walled 'cool touch' handles to reduce the risk of accidental burning.

Moreover, some of our models are marked as 'easy to clean' - given how messy grilling a large quantity of meat and fish can be, this is a massive boon if you're going to use your grill frequently!

Everdure grills range in price from $999 to $1,600, and the highest average grill price out of all brands is Everdure grills with an average price of $1,300.

When Are Most New Grills Released?

How Fast Do Barbecue Prices Drop After Release?

New barbecues drop in price by an average of 8% in the first 6 months after they were first released.

If you are prepared to wait then you could save an average of $46 on a typical $561 new BBQ by waiting 6 months before buying.

The heating system used by the bbq/grill.

Form factor is the case design of the grill/bbq. It can affect everything from the load capacity to what type of fuel is best used.

Some barbecues come with a lid which can be closed over the top of grill whilst it is cooking.

A lid on a BBQ is extremely helpful for stopping the spread of smoke, as well as keeping the heat contained, meaning the food cooks quicker, and there's less chance of an accident. It's absolutely essential for trapping the smoke for hot-smoking food as well.

The heat source on a barbecue refers to the type of fuel that the barbecue uses (i.e. gas, charcoal, electric etc.).

Which Are the Cheapest Retailers for Barbecues?

Proportion of BBQs for Which Each Retailer is Cheapest?