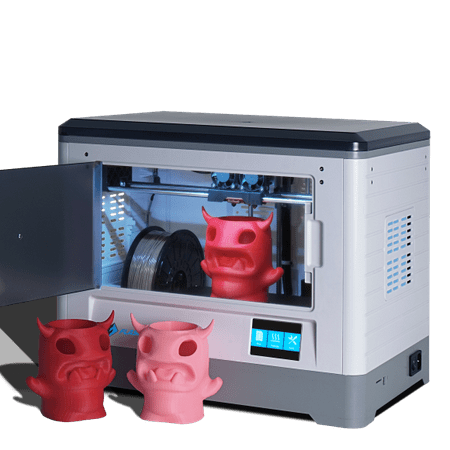 What Are The Best 3D Printer Brands?

We looked at the reviews for every 3D printer and used this to calculate the average overall rating of each brand. The top rated 3D printer brand is XYZ Printing with an average rating of 73%. Compare all award winning 3D printers.

How Quickly Do 3D Printers Drop in Price?

Should You Buy a XYZ Printing 3D Printer?

What Are the Best 3D Printer Brands?

QWhat does accuracy mean on a 3D printer?
AAccuracy determines how close the final finished product looks compared to the original plans. The higher the accuracy, the better the final product will be.
QWhy is layer thickness important for a 3D printer?
ALayer thickness determines how thin each layer that makes up the 3D printer item is. The thinner each layer, the higher the detail level of the overall product.

3D printing is a new but rapidly growing field of printing and creating. Also known as ‘additive manufacturing’, 3D printers are very different from all other printers. Below we will give you an introduction to what 3D printers are, how they work and what attributes to consider when choosing a model.

3D printing, as the name suggests, involves taking a blueprint of an object and creating a fully-realised 3D model as a physical object. The object is not so much ‘printed’ as ‘constructed’ - the printer breaks the blueprint down into hundreds of small layers, then nozzles pump a special plastic material into the shape required for the layer. It then moves up the tiniest fraction, and repeats for the next layer, and so on. Using this method the model is constructed from the base up, and at the end you have a fully 3D version of the blueprint!

Because 3D printing is such a versatile technology, the scope of what you can print is astounding. People have successfully 3D printed everything from extremely-intricate toys and clothes to replacement parts for machines. Someone has even managed to print a fully-functional camera! Many of the blueprints used to create such things are freely available online, meaning that anyone with access to a 3D printer can download and fabricate the item!

Because the process is far cheaper and faster than creating many of the objects normally, 3D printing is increasingly being used for the creation of artificial limbs., especially for children. This is because they grow so quickly that they outgrow the size of their limbs, so cheaper, fast-produced replacements will utterly change the game.

3D printing is not just limited to medical or mechanical objects - there is a growing field dedicated to 3D printing food! While still in it’s infancy, people have already successfully used fine sugar syrups or protein pastes to create a wide array of foods, from sweets to savoury snacks.

In short, it’s an astoundingly exciting field, with a lot of potential. The tech has a long way to go still, but consumer models of machines are already available on the market for early adopters.

Because 3D printing is such cutting-edge technology, models for early adopters come with a hefty price tag attached. Some small, lower end models can be got for around £200-400, but most come in between £750-1000. As with all very new tech, it’s expected that as more and more consumer models appear on the market, the prices will start to drop in the years to come. However right now, the price will form a substantial barrier to entry.

As of late 2017, growing interest in 3D printing has sparked a greater number of commercial printers available, and the first £100-200 models are starting to appear.

Once you’ve decided to buy a machine, the next consideration is the size. Because there has to be enough space in the machine to fit the finished object, what you can create will be limited by the size of the machine. Small printers may only be able to fabricate objects a few centimetres across, while larger, more expensive machines allow for correspondingly bigger creations.

Also, it’s worth noting that even the smallest 3D printers have quite a large footprint, so will take up a substantial amount of space wherever you set them up.

The current generation of 3D printers are not particularly fast, but this tech is evolving and getting faster all the time. That said, there is a substantial difference in speed even between current brands of printer. Look for a model with more than one nozzle for faster printing speeds.

Finally, 3D printers don’t yet always create a perfect 1-to-1 replica of the blueprint. This can be due to many factors, such as sub-standard quality of nozzles - nozzles that are too big don’t allow for very fine precision work, meaning it will create more of a vaguely thing-shaped lump than a delicate construction. The 3D printers on our site have an ‘accuracy’ rating - look for one with very high accuracy for the highest fidelity between the original blueprint and your finished product.

We have analysed 190 expert reviews and 375 user reviews for 3D printers and used these reviews to calculate the average rating for each brand of 3D printer.

When Are Most New 3D Printers Released?

How Fast Do 3D Printer Prices Drop After Release?

In the first 6 months after release, 3D printers drop in price by 36% on average.

If you are prepared to wait then you could save an average of $340 on a typical $942 new 3D printer by waiting 6 months before buying.

Accuracy on a 3D printer refers to the difference in dimensions between the original and the final model.

A greater accuracy means that the 3D printer will be able to create replicas significantly closer to the original, making for a far higher-quality product.

A 3D printer's print resolution refers to highest number of dots per inch that the printer is capable of producing.

The higher the supported print resolution for the device, the more detailed the final model will be!

The maximum build size indicates the largest possible size for an object that the 3D printer can generate.

A larger build size means that the 3D printer can print bigger and better models!

Print technology refers to the system used by the printer to create the 3D object.

Which Are the Cheapest Retailers for 3D Printers?

Proportion of 3D Printers for Which Each Retailer is Cheapest?